We have preliminary information about the second generation DIRECTV Genie – the HR44. It’s not out yet, but it does sound like a nice evolution of the Genie server.

Here’s the front of the unit:

And here’s the back:

Here are the main differences:

We hope to have them in stock the day they ship!

Last week at a DIRECTV conference, we were able to see several new and upcoming products, and the new DIRECTV RC71 remote was one of the best.

For many, the current line of DIRECTV remotes (see top three remotes here) leaves a little to be desired. This is especially true for many of our customers who’ve had TiVo DVRs in the past, with their excellent peanut-shaped remotes.

This new remote has an entirely new shape, and it’s a shape meant to fit in the user’s hand. It may not be as defined as the TiVo remotes, but it’s curvy, and it really had a nice feel to it.

In addition, this new remote reduces the number of buttons, removes the slider switch, and generally reduces the complexity of the remote. It’s like DIRECTV started from the ground up asking “what do users need?” instead of “how much can we cram in here?”

This one model, the RC71, has both IR and RF. But it’s important to note that the RF uses a new protocol called RF4CE. Unfortunately, that protocol is not compatible with older DIRECTV receivers. So this remote will only operate in IR mode with older receivers.

Initially, this remote will ship with three units: the upcoming HR44 Genie, the new version of the Genie Client called a C41, and the C41W which is a wireless Genie client coming sometime this year. The RC71 will work with any of these in RF or IR mode. And when it’s in RF mode, it’ll produce faster and more accurate channel changes due to two-way technology that confirms between the receiver and the remote when a button has been pressed. It’s really responsive.

We don’t yet have firm pricing on the new remote. But more info, pictures, and a manual can be found on our DIRECTV RC71 Remote page.

For probably over a week now, there has been an extreme upsurge in the number of reports, phone calls, emails, chat sessions, forum postings, and blog postings, about rebooting DIRECTV TiVo DVRs – all models except the THR22, a TiVo built on DIRECTV’s hardware.

We first realized the true extent of the problem a few days later, and initially posted about it here, on our blog, on November 15. Since then, we’ve posted a few more times. Once was when we heard from an internal DIRECTV source who acknowledged the issue. And then next was when DIRECTV seemed to go public with recognition of the problem via their Twitter stream.

So here we are, a week and a half later, and rather than being able to say that the problem has been resolved, we have to start looking ahead in case the problem won’t get solved. Without any concrete data about DIRECTV’s intentions and plans, and with at least ten days of rebooting units around the country, we are laying out the alternate solutions that we see. But, just to be clear, we really do think DIRECTV will resolve the problem. We just don’t know what the timeline is.

Here are some options:

On a personal note, I must say that I was struck when I got a phone call last night at home. I predicted on the first ring that it was my in-laws, then answered assuming that they had a question about a big trip they are taking today. I was ready to answer about passports and foreign exchange and SIM cards, but the urgent question they posed was “Why is our DIRECTV TiVo rebooting?”

Finally, some further evidence that DIRECTV is earnestly on the case: 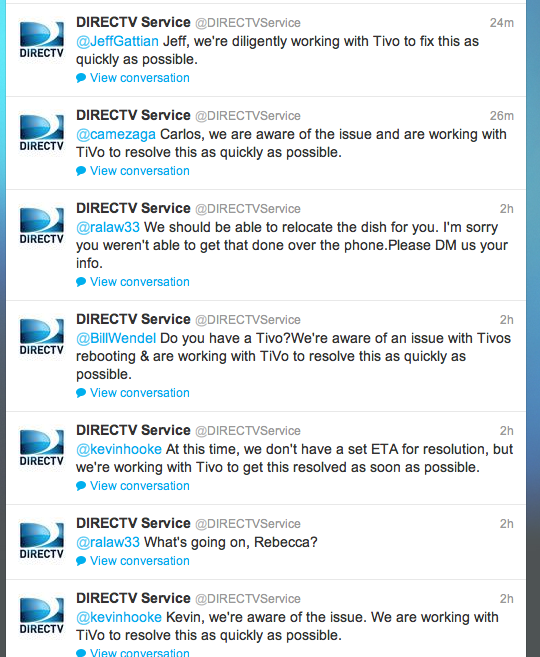 If you’ve been following our blog posts about the issues with DIRECTV TiVos rebooting, you’ve seen that we got some internal confirmation that DIRECTV knows about the problem.

As far as we know, this applies to units beyond just the R10. You can read DIRECTV’s Twitter feed on the subject here.

Since this past weekend, we’ve been getting flooded with emails and phone calls about DirecTV TiVos rebooting. Reports include basically all units except for the new THR22 HD TiVo. So this DOES include the older HR 10-250 HD TiVo, and all SD TiVos for DirecTV.

While we don’t know the cause of the situation, considering that it clearly affects Series1 and Series2 models all over the country, the source of the problem must be the satellite signal. Many affected units are not plugged into phone lines. And we’ve had no similar wave of reports about either non-DirecTV units, or about DirecTV DVRs that don’t run TiVo.

We do have some queries in to various contacts. But we have no information as of yet.

There’s a thread over on TiVoCommunity that covers the issue. It’s mostly just a list of people saying “yeah, me too” at this point, but if you have this problem, it’s worth keeping an eye on the thread.

We’ll be sure to update everyone if we learn more. Hopefully, the problem will disappear just as mysteriously as it arose.