Well, it finally happened. DirecTV enabled dual live buffers on the DirecTV HD DVR. So that’s the HR20, HR21, HR22, HR23, and HR21 Pro. If you’ve got the latest software update, you can now have a buffer of two shows at once, without any fancy remote gymnastics.

If you’ve gotten the latest OS update, you’ll be seeing this screen soon: 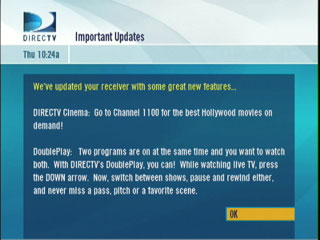 Then, when you’re watching your first show, you just press the Down arrow, and you’ll see this screen:

Of course, I chose a bad program in the background there, because these results DON’T last. For whatever reason, DirecTV implemented this in a way that it dies on its own after two hours. So the next time you sit down at your TV, you’ve got to re-enable the feature. That’s as simple as just pressing the Down arrow and then OK again, but it seems silly, and it means that if you’re recording two shows at once, you don’t really get live buffers.

Here’s the screen with those details:

Anyway, even with a bit of a hitch, it’s still a great feature.

So, I don’t have this feature yet on my HR22. How do I get it to download the latest software update? Or is DTV implementing this in phases to specific receivers?

To download the latest software, press the Reset button on the unit then enter 02468 on your remote. Shortly after the ‘Downloading software .. please wait’ message appears

Directv has completely failed in the attempt to replace Tivo DVR. This is just one more feature they can’t get right. Tivo allowed you to switch back and forth beween satellites and maintain the buffer; just by hitting previous channel button. I have this new feature on my hr21pro and its just a half hearted attempt and is found wanting. Tivo cannot come back to Directv soon enough for me.

Darn, I yearn to have my TiVO back. I thought DoublePlay would help just a little. Any thoughts why my download didn’t succeed?

I’m running an HR21/200. I forced the reset/download which appeared to succeed. After the 15 minute process the ‘down arrow’ just sounded a bong. The INFO page reports that I’m still running Software 0x312, Tues. 6/9, 2:22a.

Darn, I yearn to have my TiVO back. I thought DoublePlay would help just a little. Any thoughts why my download didn’t succeed?

It humorous but a cruel joke. : ) The e-mail I received from Weaknees indicated the double buffer was for DVR Plus users which linked to this blog which states the double buffer is only for HD TV users. Ahhh mannnn!

I’ve tracked down many references on endgadget.com about the software release being put on hold due to bugs. No reference to official announcements 🙁 It’d be awesome to hve this weekend.

hi, y’all
could you please let me know whether my DVR model is a candidate for this software upgrade

TiVo and DTV have rekindled their relationship. From what I understand, new HD DirecTiVos are coming! Yeah!

Yup! We’re excited about it too.

It looks, from our records, like your HR20 is compatible, but your older unit is a TiVo, so it can already do this kind of thing.

My HR22/100 finally received the download today. Hurrah! Why does it only last for 2 hours if it isn’t used? I’ll be glad when the TIVO Directv HD DVR comes out. Directv DVRs are junk!

This feature is essentially worthless. I used this feature most often on TIVO to watch one program (say a football game) and then go back and forth between other channels (say another football game, Red Zone Channel, etc.) On TIVO this was seamless. On DirecTV model you can only switch between the 2 channels you originally choose. Every time you want to change to a different channel you have to cancel double play and start over. TIVO can’t come soon enough – if it isn’t soon they will be losing another customer to DISH or ATT..

Got the download last night and now I have to reset my unit every time I use the Double PLay feature. A crappy piece of software. I called DirecTV and the Tech said she hadn’t gotten any information on this new feature. I used the term “Double Play” and she had to go ask about it but still had no information. How do I subscribe to dish.

DTV makes crappie DVRs on purpose to keep from being sued for copyright infringment. Hurry up TiVo!

Wow. The comments posted are absolutely wrong. The feature works fine, and it is an UPGRADE from what existed before. What’s the big deal about two hours? If you are watching the same thing for two hours, then you don’t need the dual tuner anyway. If you want to watch two simultaneous shows, this works fine.

Two one hour network programs being watched at the same time takes one hour and twenty minutes.

See if you can figure out how to use this, and you might see it’s just fine.

I have an HR21/200 receiver, and Double Play works fine – just like on my TiVo HR10-250 HD DVR. I use them both – I have picture-in-picture (PIP) on my HDTV so I can watch two football games in HD at the same time. Thank you DIRECTV for the free preview of the NFL Sunday Ticket on Sept. 13th. By the way, I’m a stockholder in both DIRECTV and TiVo. If you don’t like DIRECTV, then switch to DISH network – that’s what competition is all about. Or, would you prefer that the government take over satellite TV?

everyone sounds like a bunch of little **** with skinned knees. its a dvr. get over it.

Just got my update last night and it seems to work and I appreciate the effort. Anybody who’s ever owned a TiVO though knows it falls somewhat short. I miss my hr10-250. Even though it was a hobbled TiVO. The HR-2x boxes have some nice features but the lack of quality spoils it.

My only real concern is that double play will make my already unstable DVR’s even more prone to random reboots and freezes. Usually at the worst time. Often when I’m watching or recording on one box I’ll set the other to the same program as backup. My version of double play.

Anyone have an update to that?? I miss my TIVO and want to have a good DVR with HD!

We got the update a couple of weeks ago and so far it woks fine. I really do appreciate it. I was able to watch two movies at the same time–live–(kinda live) and did not have to put up with the commercials!

finally got the dual buffer update, it rocks!!!

Wasn’t there a post about getting an update that would allow you to designate an event as a “live’ event and allow open ended recording?